Skip to content Skip to left sidebar Skip to footer

Terrell Johnson, together with his wife Saundra, founded P.O.O.R.L.A.W. as a non-profit organization to help fight for Terrell’s freedom. Terrell was 19 years of age when he was falsely accused of capital murder, singled out by the police and based on false testimony, tried, convicted and sentenced to life in prison without the possibility of parole.

Terrell was raised by his mother, Vanessa, and his two older brothers Antwan and Robert; he is the youngest of the three. They grew up on the East side of Pittsburgh. In 1984, after Vanessa got a job at Kane hospital, she moved to Hazelwood. Terrell attended Allderdice High school. By the time he was 16 his first child was born, a daughter. By the time he was 19 he had two boys, and he met Saundra Cole who would become his wife. In 1995, he was arrested and charged with capital murder.

Terrell Johnson became the poster child in the Greater Hazelwood neighborhood and throughout Pennsylvania on how young inner-city youth are targeted by racist police officers and judged by an incentive, bias, unjust, racist judicial system. He was incarcerated at the state correctional institution SCI Greene.

Saundra sought help to prove his innocence, but was confronted with problem after problem trying to convince traditional organizations such as the NAACP and others to take up her cause. Saundra, confused and frustrated, confided in Terrell and shared with him what the spirit of god was laying on her heart in terms of starting her own nonprofit organization to fight for Terrell and against the injustices faced by young black men in the community.

After several months they decided on a name for the organization. They both understood that the name would have to be a statement, more than a fictitious name. And so God put on Terrell’s heart the name: People Of Origin Rightfully Loved and Wanted (P.O.O.R L.A.W., or PL for short).

For 18 years Saundra organized the people in the community and secured resources through out the state. She, through the PL network, finally helped to overcome his sentencing and won his release from prison in 2015. 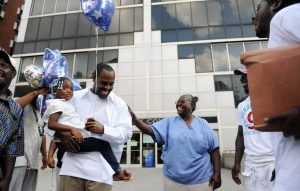